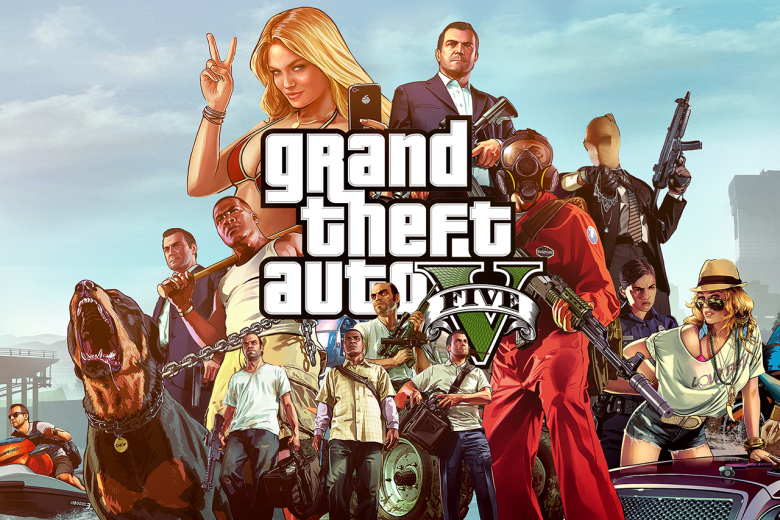 Last year Rockstar released Grand Theft Auto V for PlayStaion 3 and Xbox 360, shattering video game sales records. The track list to the orginal game was crazy, with new songs from Tyler, The Creator, A$AP Rocky, Wavves, and many many more.

With the release of GTAV for PlayStation 4 and Xbox One just hours away, Rockstar released the brand new track list for the revamped game. The soundtrack features a staggering 162 new tracks to the game. You can check it all out below.

WCC-FM: West Coast Classics
“1st of Tha Month” by Bone Thugs-N-Harmony
“Afro Puffs” by The Lady of Rage
“Bow Down” by Ice Cube
“Ballad of a Menace” by CPO
“Captain Save a Hoe” by E-40
“The Formula” by The D.O.C.
“I Got 5 On It” by The Luniz
“No More ?’s” by Eazy-E
“Servin’ Em Heat” by South Central Cartel
“Sherm Stick” by Jayo Felony
“So Many Tears” by 2Pac
“The Murda Show” by Spice 1 feat. MC Eiht
“This D.J.” by Warren G
“We Roll Deep” by The Conscious Sisters

FlyLo FM
“Eddie You Should Know Better” by Curtis Mayfield
“You Never Come Closer” by Doris
“Medication Medication” by Flying Lotus feat. Krayzie Bone
“What We Want” by XXYYXX
“Make Money” by Lapalux
“B Adams” by Mono/Poly and Thundercat
“Osaka Trade” by Flying lotus
“Masquatch” by DOOM
“Early Mountain” by Flying Lotus
“Into Vogon Skulls” by Dimlite
“Fuck The Makeup, Skip The Shower” by Knower
“4AM (Araabumzik Remix)” by Kaskade

Radio Mirror Park
“Always” by Panama
“Crystalfilm” by Little Dragon
“Flutes” by Hot Chip
“Forget” by Twin Shadow
“Heartbreak” by Age of Consent
“Hold On” by HOLY GHOST!
“In Real Life” by The Ruby Suns
“Living In America” by DOM
“Mesmerised” by Scenic
“New Beat” by Toro Y Moi
“O.N.E.” by Yeasayer
“One Girl/One Boy” by !!!
“Polish Girl” by Neon Indian
“Pharaohs” by SRTRKT feat. Roses Gabor
“Strangers in the Wind” by Cut Copy
“The Drummer” by Niki & The Dove
“Truly Alive” by Mitzi
“When You’re Out” by KAUF

100.7FM Non Stop Pop
“6 Underground” by Sneaker Pimps
“Alright” by Jamiroquai
“Applause” by Lady Gaga
“Bad Girls” by M.I.A.
“Cooler Than Me” by Mike Posner
“Days Go By” by Dirty Vegas
“Feel Good Inc.” by Gorillaz
“I Want It That Way” by Backstreet Boys
“Kids” by Robbie Williams feat. Kylie Minogue
“Let’s Go All The Way” by Sly Fox
“Living In A Box” by Living In A Box
“Me & U” by Cassie
“Meet Me Halfway” by The Black Eyed Peas
“Midnight City” by M83
“Moves Like Jagger” by Maroon 5 feat. Christina Aguilera
“New Sensation” by INXS
“On Our Own” by Bobby Brown
“Promises,Promises” by Naked Eyes
“Send Me An Angel” by Real Life
“Small Town Boy” by Bronski Beat
“Something Got Me Started (Hurley’s House Mix)” by Simply Red
“Tape Loop” by Morcheeba
“Tell it to My Heart” by Taylor Dayne
“Tennis Court” by Lorde
“The Time is Now” by Moloko
“Wait” by Blow Monkeys feat. Kym Mazelle

The Low Down 91.1FM
“Bounce Lady” by Pleasure
“Climax” by Ohio Players
“Changin’” by Brass Construction
“Funny Feeling” by The Delfonics
“I Believe in Miracles” by The Jackson Sisters
“Magic Mountain” by War feat. Eric Burdon
“Stories” by The Chakachas
“Superman Lover” by Johnny Guitar Watson

SPACE 103.2
“Back And Forth” by Cameo
“Do It Roger” by Roger
“Flashback” by Imagination
“Flashlight” by Parliament
“Gotta Get My hands (On Some Money)” by The Fatback Band
“Joystick” by Dazz Band
“Mothership Connection” by Parliament
“Nights (Feel Like Gettin Down)” by Billy Ocean
“Walking Into Sunshine” by Central Line

Los Santos Rock Radio
“30 Days in the Hole” by Humble Pie
“Black Velvet” by Alannah Myles
“Burning Heart” by Survivor
“Carry On, Wayward Son” by Kansas
“Cats in the Cradle” by Harry Chapin
“Circle in the Sand” by Belinda Carlisle
“Coming On Strong” by Broken English
“Danger Zone” by Kenny Loggins
“Fortunate Son” by Credence Clearwater Revival
“Gimme All Your Lovin’” by ZZ Top
“Mississippi Queen” by Mountain
“Peace of Mind” by Boston
“Roundabout” by YES
“Shadow of the Night” by Pat Benatar
“We Built This City” by Starship

Grand Theft Auto V for PlayStation 4 and Xbox One drops on November 18th.